SPIDER 230C is the compact radio telescope that combines radio with amateur astronomy technologies that will allow you discover the world of radio astronomy with a powerful, modular and easy-to-use product! We developed this radio telescope to allow everyone to approach this fascinating science with an affordable, turn-key, high-performance instrument.

Thanks to our patented technology, SPIDER 230C uses the equatorial mounts normally used in optical telescopes. This way you have a great compact radio telescope perfect to start your projects, perfect also for amateur radio astronomy!

The SPIDER 230C compact radio telescope uses the WEB230-5 antenna, a mesh 2.3-meter diameter parabolic antenna designed to offer a larger diameter with lower overall weight. The 230C weighs much less than a normal 1.5 meter diameter full-surface model, offering better resolution capacity due to its greater diameter while maintaining a lower sensitivity to wind due to the perforated surface of the antenna. The reflecting surface of this antenna (the primary reflector) is composed of an aluminum mesh with 3×4 mm holes for optimum reflectivity of radio waves with frequencies up to 5 GHz.

Designed to be used with equatorial mounts

The SPIDER 230C compact radio telescope is designed to be used with computerized equatorial mounts like those used by amateur astronomers with normal optical telescopes. These mounts offer, a high load capacity and pointing/tracking precision at a low price. You can use the SPIDER 230C with your equatorial mount (in order to work the SPIDER 230C needs for an equatorial GOTO mount with at least 50 kg payload capacity, Losmandy style dovetail clamp and ASCOM driver) but we can also supply it the SPIDER 230C with an EQ8 SynScan mount. The mount is controlled by our RadioUniversePRO software through the ASCOM platform so if you want to use your mount, please verify that it comes with an available ASCOM driver. 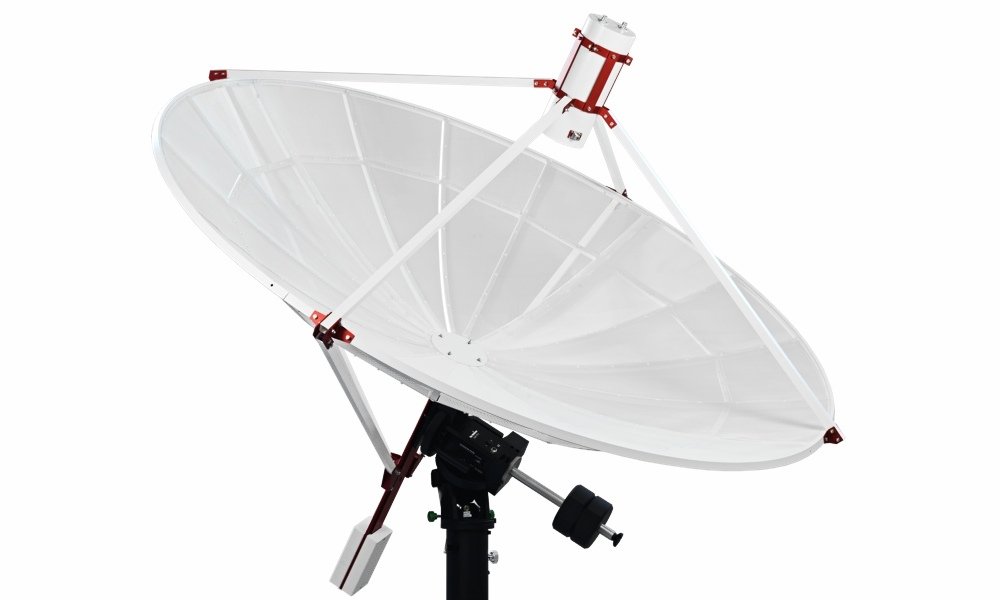 Our equatorial mounts support device (patented) allows you to install the WEB230-5 antenna on any equatorial mount (with Losmandy dovetail and load capacity of at least 50 kg, ie. EQ8 type). Thanks to a two-counterweight-sliding system to protect against accidental drops, you can get a perfect balance even in the declination axis for maximum tracking and automatic goto performance of the mount. Without counterweights the radio telescope would be completely biased towards the front (because of the weight of the primary reflector and LNA + feedhorn group with support rods) and therefore could not properly point and track objects in the sky. A special system of rear tie rods increases the rigidity of the structure while minimizing the deformation of such a big diameter parabolic antenna.

Developed specifically for 1420 MHz Radio2Space radio telescopes, the H-FEED feedhorn is designed for optimal illumination of the primary reflector, allowing for high gain while minimizing side lobes and the spillover effect, thus obtaining the best possible performance from the 2.3 meters parabolic antenna. The feedhorn is designed to allow the reception of dual polarization with support for two professional Low Noise Amplifiers (LNA) for the 1420 MHz frequency. The feedhorn is positioned at the perfect point of focus of the antenna through a rigid structure with four supports to minimize obstruction, with a focusing device to precisely focus and maximize the performance of the entire radio telescope. 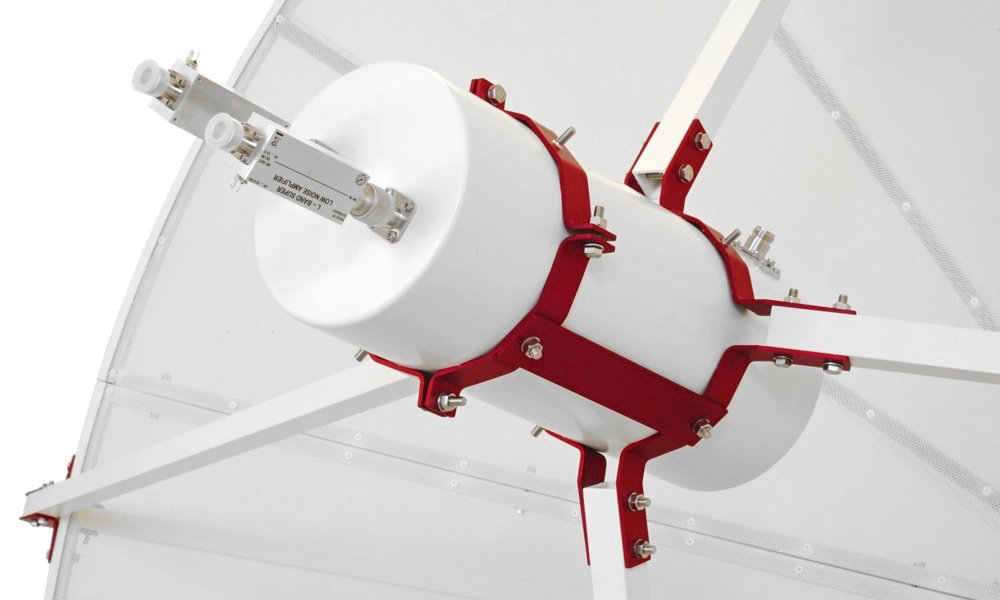 H142-One: the 1420 MHz receiver for radioastronomy, radiometer and spectrometer

In order to get the best possible performance from the 2.3 meter diameter antenna of the SPIDER 230C, the H142-One receiver has been specially developed, a 1420 MHz superheterodyne type radiometer/spectrometer, double conversion (type UP/DOWN) with 50 MHz received instantaneous bandwidth (RF=1.395MHz-1.445MHz) and 14-bit analog to digital converter. The H142-One receiver has spectrometer with 1024 channels (each 61 KHz) that are displayed and processed in real time by the control software supplied with the radio telescope. Thanks to the high gain and the low electronic noise of this receiver, the SPIDER 230C radio telescope is able to record many radio sources throughout the universe.

SPIDER 230C comes with RadioUniversePRO software that is specifically designed to allow you to operate, check all system parameters, and record various results with the radio telescope. RadioUniversePRO can be installed on a standard Windows computer and is compatible with Vista, 7, 8 and 10. The graphical interface provides a simple mode with integrated planetarium that shows, in real time, the position of radio sources in the sky, and then allows you to simply use the SPIDER 230C radio telescope. At the same time RadioUniversePRO offers the possibility to activate the advanced interface which adds many options, customizations and typical functions of professional radio telescopes and are therefore particularly useful for expert users (that found in RadioUniversePRO the same modus operandi of the large-sized radio telescopes). 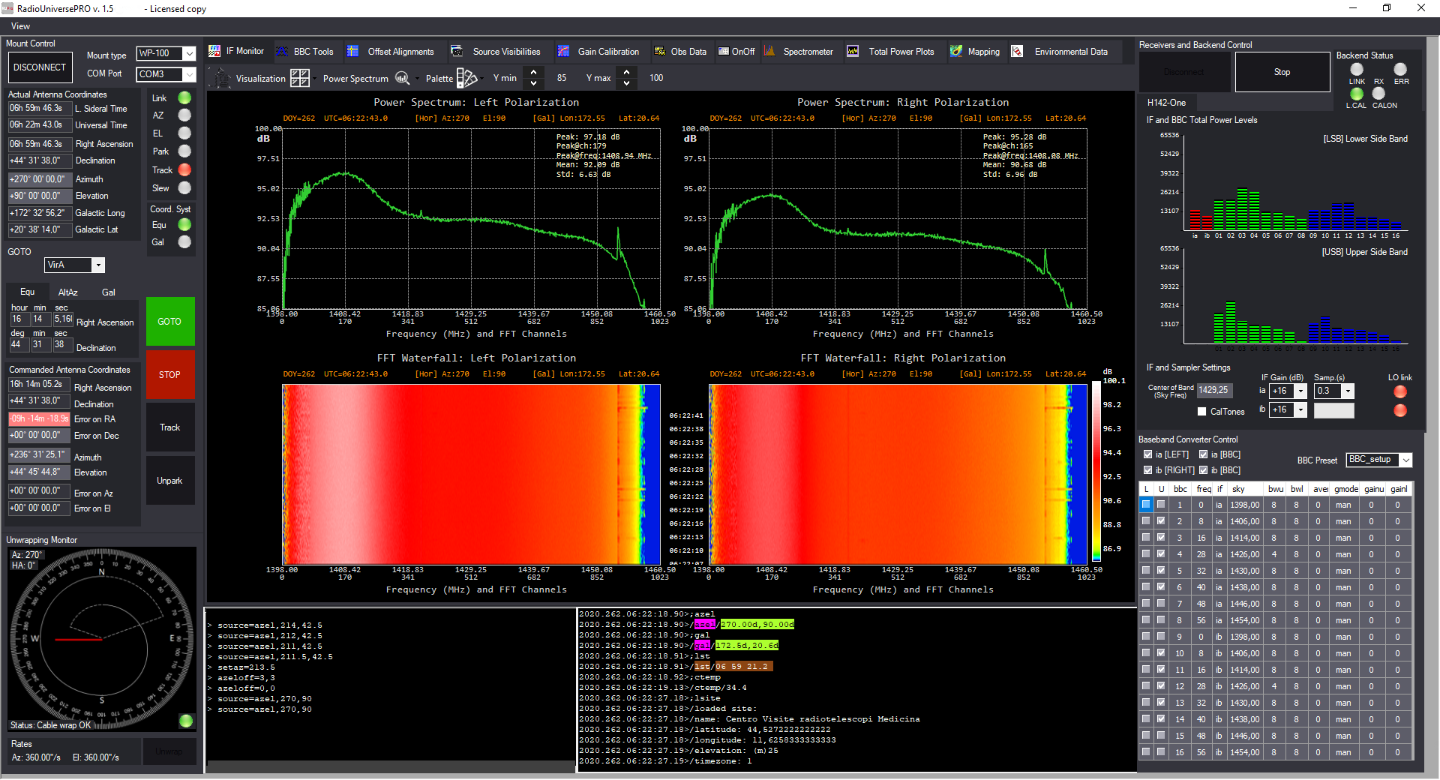 SPIDER: the first Lunar Module to flight in space with astronauts

SPIDER radio telescopes are named in honor of the first LM (Lunar Module) to flight in space with astronauts (March 1969) during Apollo 9 mission. A view of the Apollo 9 Lunar Module (LM), “Spider”, in a lunar landing configuration, as photographed from the Command and Service Modules (CSM) on the fifth day of the Apollo 9 Earth-orbital mission. Credits: NASA. 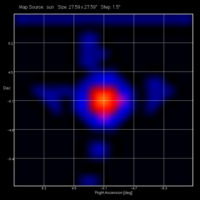 Solar radio emission can be studied by using SPIDER radio telescopes. The Sun is in fact one of the most interesting radio source in the sky. In fact the Sun not only emits visible light but also other frequencies in the electromagnetic spectrum. For example, everyone can feel the Sun heat on our skin, expression of infrared radiation. In this article, with step-by-step guide, we see how the SPIDER radio telescopes detect radio waves coming from the Sun and we show…

Is it possible radio astronomy at school? In general, the activities that many schools develop in astronomy are usually made ​​with optical telescopes because instruments for other electromagnetic spectrum bands are considered too expensive or difficult to use. This often translates into single evening visits with students at the public observatories, so you can not conduct a continuous study. Thanks to our SPIDER radio telescopes is now really possible to make radio astronomy at school because, unlike an optical telescope, they can… 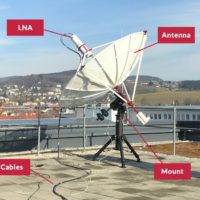 Is it possible to make amateur radio astronomy? If you already have an equatorial mount (the one used with optical telescopes) with at least 50 kg load capacity and Losmandy dovetail clamp (like an EQ8), thanks to the products developed by Radio2Space, you can turn your telescope into an amateur radio telescope, and start your amateur radio astronomy program without the need to have extensive knowledge of radio techniques. A radio telescope consists of an antenna that collects the incoming waves from space… 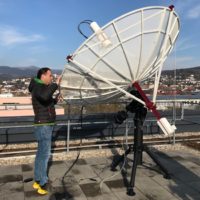