Is it possible to make amateur radio astronomy? If you already have an equatorial mount (the one used with optical telescopes) with at least 50 kg load capacity and Losmandy dovetail clamp (like an EQ8), thanks to the products developed by Radio2Space, you can turn your telescope into an amateur radio telescope, and start your amateur radio astronomy program without the need to have extensive knowledge of radio techniques.

A radio telescope consists of an antenna that collects the incoming waves from space (corresponding to optical tube in an ordinary telescope), a mount that follow objects in the sky (such as the equatorial models that amateur astronomers usually use, but that in professional radio telescopes is usually alt-azimuthal), the receiver that amplifies the radio signal (which corresponds to the CCD camera of an amateur telescope) and the back-end that records and processes data (corresponding to the computer with the software that controls the amateurs telescope and capture images with the camera).

A compact radio telescope for amateur radio astronomy: the antenna installed on the equatorial mount.

If you own a computerized equatorial mount you already have one of the components of this system, and if this has a weight load capacity of at least 50 kg and Losmandy type dovetail clamp (for example, an EQ8) then you can use our WEB230-5 2.3 meters diameter parabolic antenna. Amateur astronomers are able to use their mount same functions to support the parabolic antenna (as they do for their optical tube) using this system in a similar way to telescopes and without the mount to be modified. The main difference is that there won’t be an eyepiece to bring the eye on to see the image, but the antenna will collect radio waves (with different wavelength than visible) coming from the area of ​​the sky pointed by the mount. For example, you will be able to capture radio waves coming from different objects in the sky, also during daytime, and record also radio maps.

Do I have to have advanced knowledge of radio techniques or do I have to be a ham radio in order to use the radio telescope? No, our products are simple to use: all amateur astronomers can use our radio telescopes. All radio components of the instrument are pre-installed and you just have only to press the on button to begin recording radio waves coming from space.

When the mount computer is turned on, you normally have to align to the stars. However, by using the mount as a compact radio telescope for amateur radio astronomy, you will no longer see exactly where this point to (stars have a radio wave emission too weak to be detected by an amateur radio telescope). That’s why Radio2Space developed a special technology, integrated in the control software of their radio telescopes, to allow you to directly align on radio sources you can’t see.

A compact radio telescope for amateur radio astronomy: in the control room the receiver, connected to the external radio telescope, sends recorded data to che control computer with the RadioUniversePRO software

You have now installed the antenna on the mount and, thanks to WEB230-5 special balancing system, you can use it as a normal optical tube. The radio waves coming from space, however, are very weak and therefore they need to be amplified. This is the task of the H142-One radio astronomy receiver. It connects to the LNA low noise amplifier which is installed at the focal point of the parabolic antenna with the H-FEED feed horn that is used to select the reflected waves from the parabolic antenna to the LNA. This sends the collected signal, through a coaxial cable, to the receiver whose task is to amplify it as much as possible and minimizing the system noise.

Now you are able to point the antenna to a precise sky area and to record the radio emission. In the same way amateur astronomers are used to record images with their telescopes (astrophotography), our compact radio telescope for amateur radio astronomy, thanks to the special RadioUniversePRO software, allows to record radio waves emission, spectra, transits or radio-images of the area of the sky you want to study in a simple way. This way everyone can start in amateur radio astronomy without having a deep technical or astrophysical knowledge. 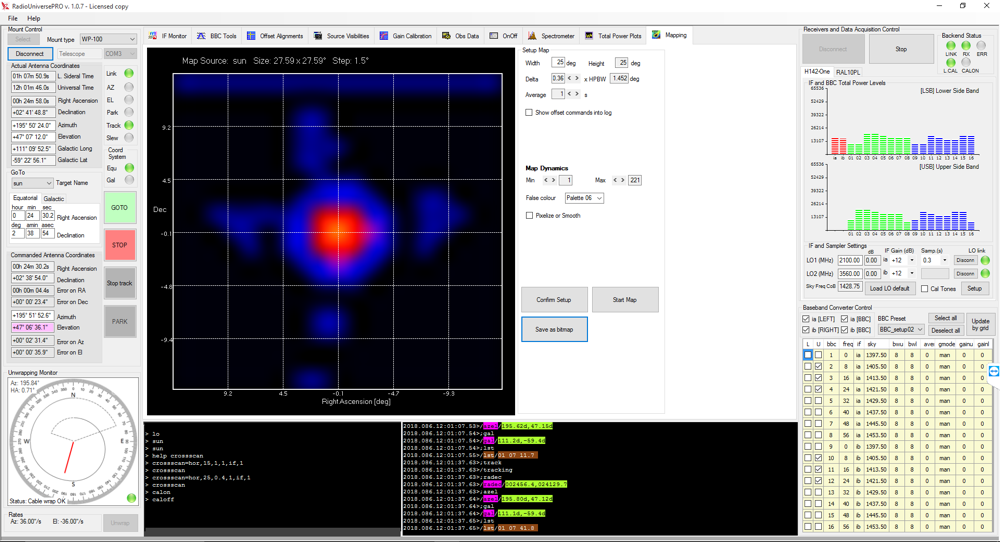 Unlike a normal optical telescope, a radio telescope can be used perfectly even during the day time and, if recording 1420 MHz frequency like in the example above, also in bad weather conditions. But please note that a telescope equatorial mount is not weatherproof. If you want to keep the radio telescope permanently installed in the field, you will have to protect it with a proper structure like a dome. Another possibility you have is to move the radio telescope (since it’s compact), with the help of a few people, when not in use (or when the weather condition is bad).